On May 1, a financial news website called 2/47 Wall Street published an article entitled “The Death of Classical Music in America”.

My last post addressed the faulty reasoning on which articles on this subject are often based. Today, I’d like to address the role of facts.

The section that particularly caught my eye was this one, about the classical record industry. Of all the things covered by the article, it’s the bit I know most about. 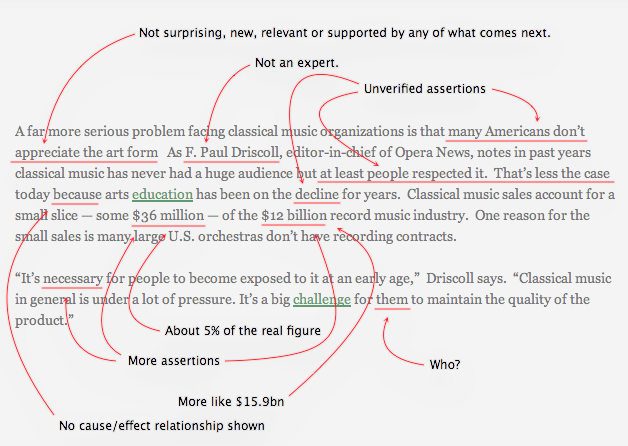 There are a lot of unverified, unquestioned assertions here. Some of them deal with things that are hard to check. The most we can say about them is “they haven’t been proven” or perhaps “they haven’t even been shown to be likely”. Let’s look at the numbers though. It’s easy to check numbers. They’re right or wrong.

Are these numbers are a continuation of the quote from F. Paul Driscoll, or offered as facts by the author? Either way, they’re wrong.

Page 5 of the IFPI‘s  2010 Digital Music Report says the digital music market was worth $4.6bn, or 29% of total trade revenues. That means the global recorded music industry was worth $15.9bn, not $12bn. These are wholesale numbers. Total retail numbers are almost exactly 50% higher.

This is one detail from the article that I knew off the top of my head was wildly wrong, and it’s one of the easiest parts to check. How much else is total bullshit? Didn’t you people go to university? Didn’t you learn to write an essay? Didn’t anybody tell you why you cite sources? Check sources? Question things people tell you? Or did you think that none of that matters when you’re only publishing financial analysis? Do you expect people to base decisions on something this poorly researched, or is there some other point to it? What would happen if you reported Apple’s quarterly earnings or Google’s stock at 1/38th of the correct value? Do you think a disclaimer like “articles are simply the opinions of the writers” makes it ok to reproduce outright falsehoods as if they were facts?

I would genuinely be interested to know the answers to these questions.

I don’t expect everything I read to come with a bibliography, but we need to be careful what we believe – not just when we’re basing decisions on a report that is sitting in front of us, but also when we let this sort of hearsay slowly and quietly turn to “knowledge” in the backs of our minds, only to be recalled as a general idea of the state of things at some point in the future.