Max Feldman: somebody has to tear you a new one. It might as well be me. 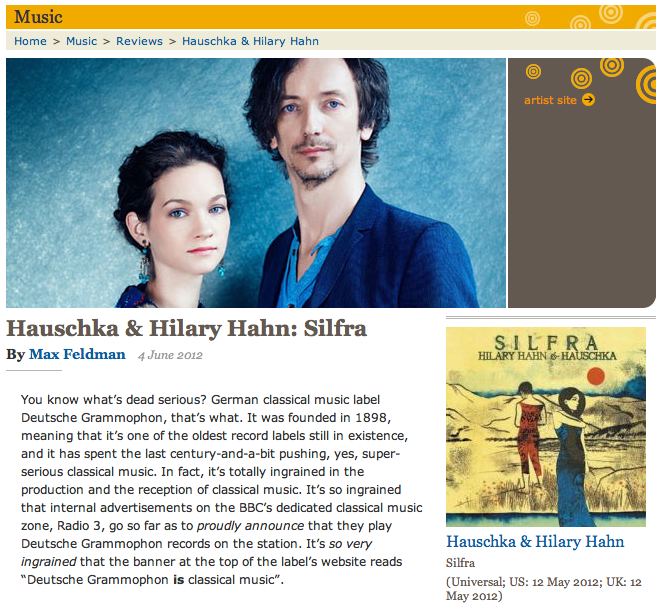 It has been almost two months since Max Feldman wrote this amazingly pompous review of Hilary Hahn and Hauschka’s recent album Silfra.

I resisted the temptation to comment on how bad it is. Who expects Popmatters to come up with anything better?

In the end, though, this feels like a depressingly circular argument. We shouldn’t expect any more of it because it is bad? It’s a miserably pessimistic way to approach music criticism. If a publication has readers, why shouldn’t we expect its writers to do their jobs properly? I realise this line of reasoning puts Lebrecht in the firing line, but we can deal with him later. For now, Feldman, it’s your turn.

Anybody who doesn’t enjoy my posts criticising the work of journalists good and mediocre might want to give this a miss. The review is so riddled with bollocks that the only way to address it is line by line. Feldman’s words are in bold italics. Mine aren’t.

Here’s how it starts:

Did I mention it’s German? The clue is in the name. It’s tempting to go after the loaded language of “dead serious” but if I pick on what I think is being said as well as what is actually being said, this will be a very long post indeed.

It was founded in 1898, meaning that it’s one of the oldest record labels still in existence, and it has spent the last century-and-a-bit pushing, yes, super-serious classical music.

…and Bryn Terfel’s Welsh Album. “Super-serious” is not, perhaps, the most helpful way to describe what DG does. A lot has changed since 1898. Modernism was actually modern back then. Verdi and Mahler were still alive. Stockhausen and John Cage hadn’t been born. Over the years, DG has evolved with the music. They record plenty of music that doesn’t pre-date the label, and remember Sting’s lute album? That was DG.

A lot of words so far. Not many facts. Nothing about the record at all.

And it’s the second time he’s worked with Grammy-winning classical violinist Hilary Hahn, who appeared on “Girls” from 2011’s Salon Des Amateurs. This prompts us to ask some vital questions: does Silfra represent a key moment in the trajectory of Hauschka’s career?

If we don’t ignore Hilary Hahn’s eight other albums for Deutsche Grammophon, this question seems rather silly.

Is it a turning point that marks his moving from making “post-classical” music with avant-garde winks and electronic nudges to making conventional (i.e. “proper”) classical music?

Even if we do ignore Hilary’s eight other albums for DG, these questions still seem rather silly. What actually happened is he made a particularly unbleepy record with a collaborator who isn’t known for bleepy music at all, and put it out on her label. Nothing bad would’ve happened if that had been what you said, although it might have prompted the response that bleepiness is hardly a defining characteristic of his work to date.

Some non-silly questions might include: Is it competently executed? Does it sound nice? Who would like this record? Will this music be a surprise to fans of any of its contributors, and in what way? If this record represents a meeting of musical cultures, do they each get an equal voice, and do they create a coherent whole? Is this something we’ve heard before?

The very fact of Silfra‘s release on Deutsche Grammophon would seem to suggest so, and it all seems to be trying very hard to convince us of its own aesthetic authenticity.

Above all, let me be very clear: it is an album. Recorded sound. It is not trying to do anything at all. It is certainly not trying to convince us of its own aesthetic authenticity, whatever that is.

Silfra is a series of totally and utterly improvised tracks that the duo recorded together in the well-famous Greenhouse Studios in Reykjavík in Iceland.

Totally and utterly improvised? Did you get this from the episode of Charlie and Lola where Lotta makes a conceptual album with Lola’s imaginary friend Soren Lorensen, and Lola gets so very extremely angry that she pens a lengthy neo-Hegelian polemic on the misuse of irony in post-constructionist tonal structures before going to her room to do stickers and beads?

They completely ignored all the stuff they had been preparing together since 2009, and set about recording an entirely new set of pieces….

Really? Your last sentence left me in such doubt about the extent to which the material was improvised.

…– and, yes, these are definitely pieces rather than mere songs.

You’re talking about a completely instrumental album. Is this distinction meaningful anywhere outside your own head, and, if it is, does it matter?

But that pervasive notion of aesthetic authenticity presents us with two related problems that are quite difficult to solve.

Again with the aesthetic authenticity.

The first problem is that Silfra lives in the past.

I think the words “It sounds to me as if” are missing from this sentence.

This doesn’t mean that it’s a conservative record per se.

Damn straight. It doesn’t mean anything at all.

It does, however, mean that it soundtracks a world that can never be anything but imaginary, and its conviction of its own aesthetic authenticity is purely notional – it can only ever be an idea.

The process here seems to be (1) listen to the album (2) imagine what it all “means” (3) argue with that imaginary meaning.

Unlike this review, which is a great example of relaxed, unselfconscious clarity.

After all, there are tracks here with titles like “Adash” (a word from Old Testament Hebrew meaning “to tread” or “to trample on”) and “Godot” (which, yes, culture vultures, is clearly a Beckett reference), which goes on for an entire 12 minutes.

People who live in glass houses shouldn’t come this close to calling an album pretentious.

Ultimately, Silfra is conflicted by the constant threat that the dead weight of intellectualist classical music tradition will topple any real sense of emotional resonance it might have.

The album is not conflicted by this. The reviewer might be, but that’s a whole different thing. If what you’re trying to say is “My preconceptions of classical music make it hard for me to like this” then say that.

The second problem is that Silfra is naïve.

Either it’s always a problem for music to be naïve, or you’re going to have to explain why it’s a problem here.

There’s something quite pretty about this sort of nostalgia, but nostalgia seems to be so inscribed into the music that nobody (not Hauschka, not Hahn, and certainly not the listener) is able to claw their way out of it.

Here, nostalgia comes not in spite of the real world, but at its expense.

I have no idea what this means.

Indeed, Silfra is the soundtrack to a world completely unaffected by the clattering hysteria of our contemporary cultural crises, of mass communication and mass consumption.

Well, they did record it in Iceland which, as I understand it, is a good place to go to get away from all those things.

As we know, the buzzing, whirring imperfections of the prepared piano always conflict with classical sensibilities, but Silfra doesn’t ever challenge those sensibilities enough.

This is particularly evident on the forlorn “North Atlantic” and the quiet, lilting “Krakow”. But they’re just symptomatic of where Silfra doesn’t ever get it quite right – it’s not broad, bold, or bustling enough to authentically capture what it tries so hard to get at.

There’s some validity to approaching a review as an assessment of whether the artists achieved what they set out to do in creating an album. This only works if you ask the question “does this sound like they wanted it to” and not “does this successfully convey the extramusical message I imagine its creators intended to convey”. That’s a straw man. Go knock it down if you want, but you look pretty crazy, standing in the middle of the street, fighting with a mannequin.