Mark Hachman, I’ve got a bone to pick with you.

In Harry G Frankfurt’s 1986 surprise philosophical bestseller “On Bullshit” he explains that lies are when you intentionally deceive, whereas bullshit is when you talk without regard for the truth.

In the UK, Decca (here “signing” some nuns*) has become particularly adept at exploiting the average journalist’s hazy understanding of the modern record business. I’m completely fine with that. We ought to expect publicists to distort the truth almost as much (if not slightly more) than politicians. It’s their job.

We should, though, expect journalists to care whether the statements they make (or repeat) are the truth. That’s their job. Otherwise, they’re just bullshitting.

I’d like to enter into evidence Exhibit A, a story from PCMag about Decca’s plan to do a digital rush-release of a recording from April’s Royal Wedding (below). It’s a triumph of dictation. 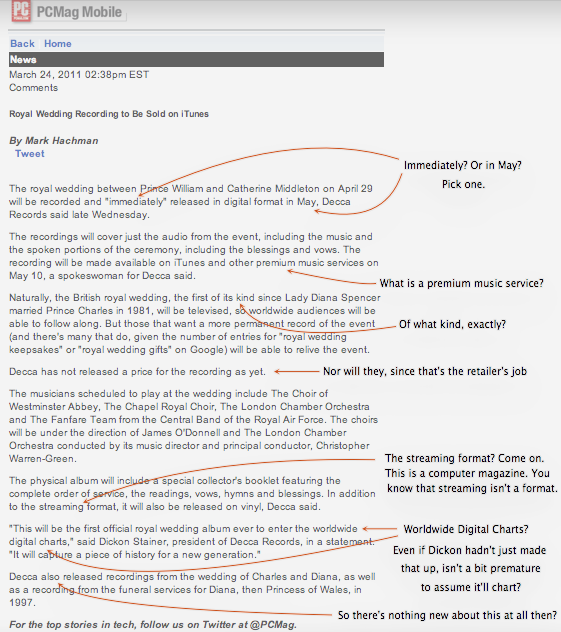 There’s nothing particularly new about rushing the digital release of an album. Decca know this very well, because they did it with the Vienna Phil’s New Year’s Concert this year, last year, the year before and (you guessed it) the year before that.

It would be nice if we could agree on what we were going to call these sorts of rapid digital pre-releases, especially when they’re recorded live and it’s difficult to predict when they’ll actually be available. While that might be where the problems with this story start, though, it isn’t where they end.

Aside from the basics (the date of the wedding, the list of performers and that a record will come out at some point), there isn’t really a solid fact in here – all despite citing three sources (Decca, a spokeswoman for Decca and Dickon Stainer himself).

It’s just a bunch of glib statements made by people who understand the music business and repeated by somebody who understands technology, all apparently unchecked by anybody at all.

The one question the author raises – the retail price – is asked (rhetorically) of the wrong people. In most major digital music stores, retail prices are set by the stores themselves and not by the labels, who set a wholesale price that the stores can mark up as much as they like.

If this is the kind of commentary that we’re reading about digital music, is it any wonder that so many of us are confused?

* When it says their new label-mates will include U2, Amy Winehouse and Lady Gaga, that’s a bit of a stretch. U2 and Lady Gaga are signed to Interscope. Amy Winehouse is on Republic. Both of these labels are owned by companies owned by Universal Music Group, which also owns Decca (formerly Universal Classics & Jazz). They’re in different buildings, in a different city, in a different country, on a different continent. I also wonder if it isn’t a bit disingenuous to show them passing the contract through the screen. Did they pass the microphones through there, too?